Zao Wou-Ki was a Chinese painter and etcher known for his non-figuratives paintings with a mix of occidental and oriental artistic styles. He came from an ancient family lineage that dated back to the Song Dynasty, and went to live in the U.S. while his brothers and sisters stayed in China. Wou-Ki was a very talented student and drew and painted from the age of 10. In 1935 at the age of 14, he studied at the école des beaux arts of Hangzhou. He studied drawing for six years, oil painting, traditional Chinese painting and calligraphy. His first exhibit took place in Chongqing with works influenced by Matisse and Picasso. Wou-Ki then moved to Paris in the Montparnasse neighbourhood in a studio next to that of Alberto Giacometti and said he chose to move there because of the prevalence of impressionism.

The artist was awarded the first prize for a drawing contest in 1949. His first Parisian exhibition took place the same year at the Galerie Greuze. Starting from 1952, his works were exhibited in Paris at the Galerie Pierre then in Bâle, in Switzerland, Lausanne, the U.S., Washington, Chicago, and New York. In 1957 he participated in the Salon de Mai (where he will show his work until 1978) and presented his lithographs at the La Hune gallery. Alain Jouffroy wrote in Arts « Zao Wou-Ki’s practice shows how the Chinese vision of the Universe, where blurriness and distance reflect a spirit of contemplation rather than something contemplated, has become a modern universal vision. » His artistic evolution brought him towards lyrical abstraction but also informal and gestural art.

The first monograph on his practice was published at the Musée Poche with a text by Claude Roy and a preface by Henri Michaux in 1957. The artist also presented a personal exhibition of paintings at the Galerie de France in Paris. It is here that he became friends with Hans Hartung, Pierre Soulages, and Alfred Manessier. Wou-Ki exhibited at the Tokyo Gallery in Japan in 1961. A retrospective dedicated to his paintings took place at the Folwang Museum of Essen in 1965 (Germany) as well as his sixth personal exhibition at the Kootz Gallery (New York). Zao Wou-Ki became a painting professor at the École nationale supérieure des arts décoratifs in Paris in 1980, and fours years later was made officier de l’ordre de la Legion d’honneur by the French minister of culture, Jack Lang. The works of the acclaimed artist can be found in public collections worldwide in Germany, Austria, Belgium, Bresil, Canada, China, Spain, the U.S., Finland, France, Great-Britain and Japan. 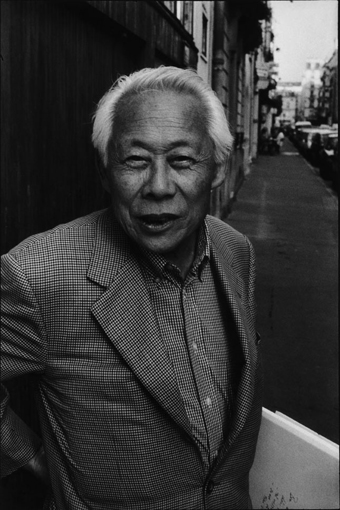